Skip Navigation
We use cookies to offer you a better search experience, analyze site traffic, and personalize content. If you continue to use this site, you consent to our use of cookies.
Member Spotlight

Saying Yes to Amy: How One Educator Helped Her Union Grow

This rural, northern Arizona association has grown from 15 to 150-plus members in only a year. How did they do it? 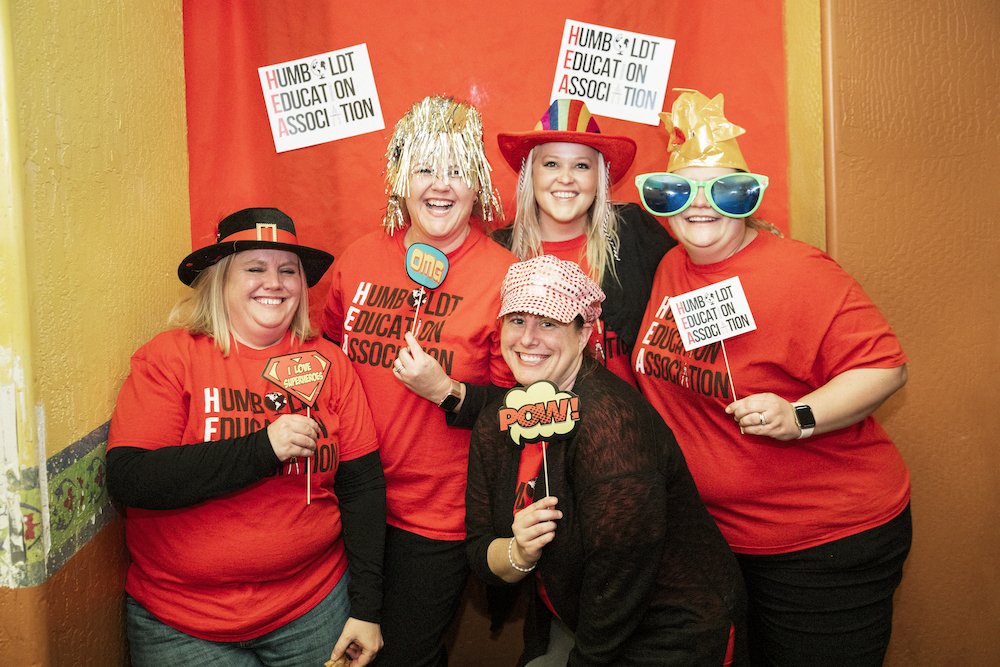 “It was a money issue,” says Certain, a paraeducator. He wanted to say yes, but he and his wife sometimes struggle to cover the rent on his roughly $12-an-hour salary. “And then Amy talked to me again—a couple of times,” says Certain. “And [eventually] I thought, you know, I’m in my early 30s. I’m a legit adult. And I can’t expect people to speak for me.”

Over the past year, a lot of educators in rural Prescott Valley, Arizona—a conservative community about 90 miles north of Phoenix—have said yes to Amy Bowser and her growing team of site leaders. Their little association, the Humboldt Education Association (HEA), of which Bowser is president, powered up from 15 members during the 2018 – 2019 school year to an astounding, 165-plus members during the 2019 – 2020 school year—and growing.

“It’s been an amazing year. Our membership is through the roof!” says Bowser, an elementary teacher who has worked in Prescott Valley since 2006 and helped lead her school’s spirited participation in Arizona’s statewide #REDforED walkout in 2018.

Bowser's strategy for growing HEA—in numbers and strength—is simple: In one-on-one conversations and small groups, Bowser first talks about why she joined HEA, and then asks her colleagues to join her. Bowser's personal “story of why,” as she calls it, is sincere and from the heart. She talks, she listens.

“Why did I join? Because I want a seat at the table. Because if you’re not at the table, you’re on the menu,” Bowser says. “My ‘why’ is I want my voice to be heard. I believe in what we’re doing in our schools, I believe in our kids, and we need more.” More for students is possible, Bowser believes, when educators get together and demand it.

Not every new HEA member has the same reason for joining. Certain talks about the needs of students with disabilities to be supported in school, and how those supportive practices should be duplicated across the district. “The vehicle for that is HEA,” he says.

Meanwhile, Rosa Maria Corradi, an elementary teacher who helps lead HEA’s new advocacy committee, sees her membership as an avenue to supporting colleagues who don’t understand district policy or run afoul of their administrators. With the help of HEA’s legal counsel, “I’m that buddy who will sit with you and administration, and be your advocate,” she promises. “Before this, if you had an issue, you didn’t have anybody.”

Elementary teacher Al Zalfini is one of the newest members, he says. “I was really active in #REDforED and wanted to keep going with it. I was nudged to join,” he admits. Adds Corradi, “You have a lot to say, Al!”

As a result of state funding cuts, salaries are low in Prescott Valley—$37,000 a year for first-year teachers and $12 an hour for education support professionals. But that’s not the number-one issue mentioned by HEA members. Money doesn’t motivate Certain—who previously worked as a pastor and group-home manager—to work with students with disabilities. “All of us could use a raise, but obviously I don’t do it for the money. I do it because I love it,” says Certain.

All understand that a bigger, more active HEA means a more powerful advocate for their students, their public schools, and their profession. That’s why they say yes, and ask their colleagues to say yes, too.

‘WE REALLY WANT TO HEAR FROM YOU!’

On a wintry Thursday night, Bowser hosts a jam-packed, celebratory get-together at a local restaurant for dozens of the district’s education support professionals, known locally as classified members.

As they load their plates with queso and quesadillas, she introduces herself and HEA’s red-shirted officers, saying, “My name is Amy Bowser, and I am so glad you’re here! We want to celebrate you! Inside your goodie bags, there are comment cards. Fill one out and give it to somebody in an association shirt. We really want to hear from you!”

In 2008, when Corradi first moved to Prescott Valley from Tucson—where she was an Arizona Education Association member—she looked for HEA and couldn’t find it. "So I stopped looking,” she says.

Today, it’s impossible to miss. Association leaders publish quarterly newsletters and drop by schools with flowers and gift cards for amazing employees, among many other outreach activities. In 2019, Bowser held meetings at every Prescott Valley public school. She calls it “a road show,” to explain how state lawmakers allocate money—or don’t—to school districts.

This is a huge issue for Bowser and other HEA members. To illustrate the impact of state funding cuts, Bowser points to a steady drip of rainwater, landing in a plastic wastebasket outside her classroom. “I [used to be] a 40-year-old woman who didn’t understand state funding! Now I do. Now I know why our ceiling is leaking.”

Since 2009, Arizona lawmakers have cut $4.56 billion to public schools. The state’s per-pupil spending ranks 49th in the U.S., behind far poorer states like Mississippi and neighboring New Mexico. With an average 23 students per teacher, its student-teacher ratio also is the worst in the nation. (New York and Missouri have the best ratios at about 12:1.)

It’s bad across Arizona, but it’s really bad in Prescott Valley. Ninety-five percent of Arizona school districts get more state funding than they do. “In rural communities, we have a challenge getting our voice heard,” says Bowser.

The cozy shades that dim the glare of fluorescent lights in Bowser’s classroom? Paid for by donors. (And helpful for student focus!)

MANY SPEAKING WITH ONE VOICE

That same night, after collecting cards, taking photos, and making sure dinner will be delivered to night custodians who can’t attend the get-together, Bowser is off to her next gig. She drives to a local high school to co-host, alongside the regional PTA, a “community conversation” with Superintendent Dan Streeter.

Like Bowser, Streeter is focused on funding. He tells the crowd of 50-plus parents and educators that a much-needed local bond referendum, which would pay for building repairs and maintenance, fell short by about 100 votes last year. Meanwhile, the state has cut capital funding to Prescott Valley by $18.9 million over the past decade.

This is why Bowser’s ceiling leaks. This is why the heat in some schools doesn’t always work. “We will run out of capital funds in two years,” says Streeter.

But with HEA’s expanding membership, the superintendent believes educators can make a do-or-die difference in the next referendum. “Our certified and classified association is as strong as it’s ever been. We have what we need to get 100-something more votes!” he says.

For her part, Bowser says members will be glad to help Streeter and school board members with a new bond. “Our school board is amazing. They’re accessible and transparent,” she says. HEA members also are preparing for the state legislative session. More road shows, says Bowser. And more work ahead to support members in their workplaces, says Corradi.

“I hope to develop our advocacy to the point where when we walk into the room, the principal says, ‘Oh good, HEA is here’—because we’ll be the level-headed, knowledgeable person in the room,” she says.

As the association grows, its voice does, too.

“When I was a kid, my parents were teachers, and we got dragged to the [union] office to stuff envelopes with information for new teachers,” recalls Certain. “I got to see firsthand how being a part of an association gets things done, how it makes it better for everyone.”