Immigration raids have created a crisis in schools across the country. Instead of focusing all of their efforts on violent criminals or convicted felons, ICE agents are seizing students at school bus stops and on their route to school—a practice that has resulted in a significant drop in attendance in some schools. 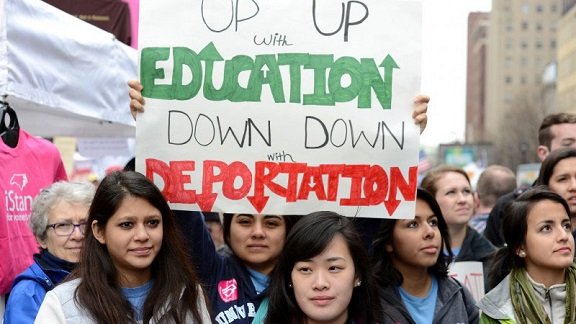 The case of Wildin Acosta, the North Carolina high school senior seized at a bus stop as he headed to school one morning, has garnered national coverage and moved communities to action. Wildin spent six terrifying months in a detention center awaiting deportation until the united efforts of educators and community advocates secured his release.

“Wildin’s plight and the actions of dedicated teachers and community members who wrote petitions and came to Washington to make their voices heard have focused attention on misguided enforcement of a bad patchwork of policy,” said RosaMaria Cordova, an AEA member and new teacher mentor for Arizona public school teachers.

“There are thousands of young people like Wildin,” observed Cordova. “These raids have a terrible impact on students, families, and educators across this country.”

Cordova works with Title I schools that serve a mostly Hispanic and refugee population. She notes that these schools also have a higher than average turnover rate for teachers, citing the practical challenges of educating students who don’t attend class because their parents keep them home in fear of raids.

“There are also emotional burdens teachers must cope with when students live in constant fear of being deported or coming home from school to find their parents have been swept up in a raid,” explained Cordova, who’ll begin the new school year talking with educators about the tools and tactics they’ll need to meet these challenges.

Every student in this country is guaranteed the right to an education. Teachers make sure students feel safe and are able get the education they need to change the world. Just because families aren’t documented doesn’t mean they have no voice. The teachers I work with help them find that voice.