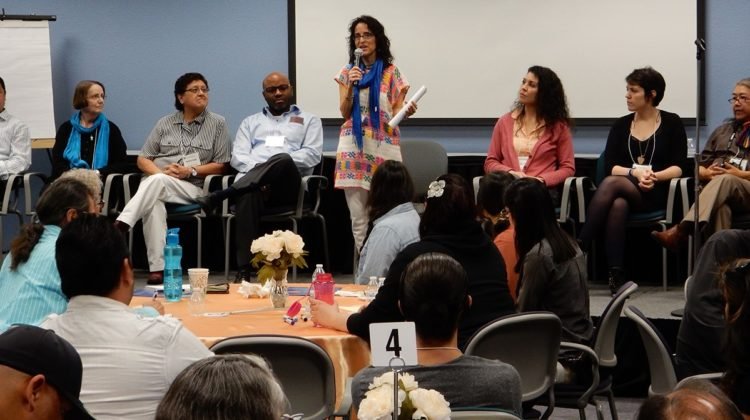 The beginning of session at Pima Community College this year was also the official launch of the Department of Ethnic, Gender & Transborder Studies. After many years of hard work by faculty, staff, students and community members, there was a sense of celebration at this achievement.

“This department didn’t come together overnight. It is the culmination of many years and even generations of struggle, work and building, of not letting setbacks be the end, and of not letting incremental gains stop us from striving for more,” said Francisca James Hernández, Ph.D., Head of the new Department.

The opening of the Ethnic, Gender & Transborder Studies Department coincided with the reversal of a 2012 court ruling which essentially banned as unconstitutional the teaching of Mexican-American Studies in Arizona K-12 classrooms. The federal judge who reversed the ruling found that it violated students’ constitutional rights and that those who worked to end Mexican American Studies were “motivated by racial animus” and “by a desire to advance a political agenda by capitalizing on race-based fears.”

The Arizona law at the root of the court case only targeted Mexican-American Studies in the Tucson Unified School District. The two Republicans who advanced the bill claimed the classes were stoking racial tension and “radicalizing students.” Evidence points to just the opposite. The teaching of ethnic studies increases student academic engagement and positive student outcomes.

Ethnic Studies is vital to a thriving community. It teaches you that democracy and equality are a social struggle. And it gives you some intellectual and practical organizing tools on how to go about creating greater social justice and social equality,” said Hernández. “We have people in powerful positions who have no understanding of the social heritage where they live and we need to educate them and build these bridges.

The initial legislation and court ruling served as a spark for organizing at Pima which already had in place Ethnic Studies faculty who taught a variety of courses, but were not an official department. Following the passage of the legislation in 2010, faculty, staff, students and the community were engaged in an organized week of programs focused on ethnic studies. There were 22 events over 4 days which drew over 500 people.

This Ethnic Studies Week was so successful in bringing together thoughtful community discussions that the faculty who helped organized it revived the concept during the past two years as a series of Spring Summits. The Summit crowd size doubled from 2016 to 2017.

Members of the community who attended noted:

“Having a supportive administration and community, a strong faculty, and engaged students are critical for creating a new department like this. But our struggle isn’t over. To continue to exist we need to reach out to our local community and across the state and even to the legislature to defend our gains and ensure we are supported. We need to make sure everyone understands how critical Ethnic Studies is to building a successful community and future,” said Hernández.