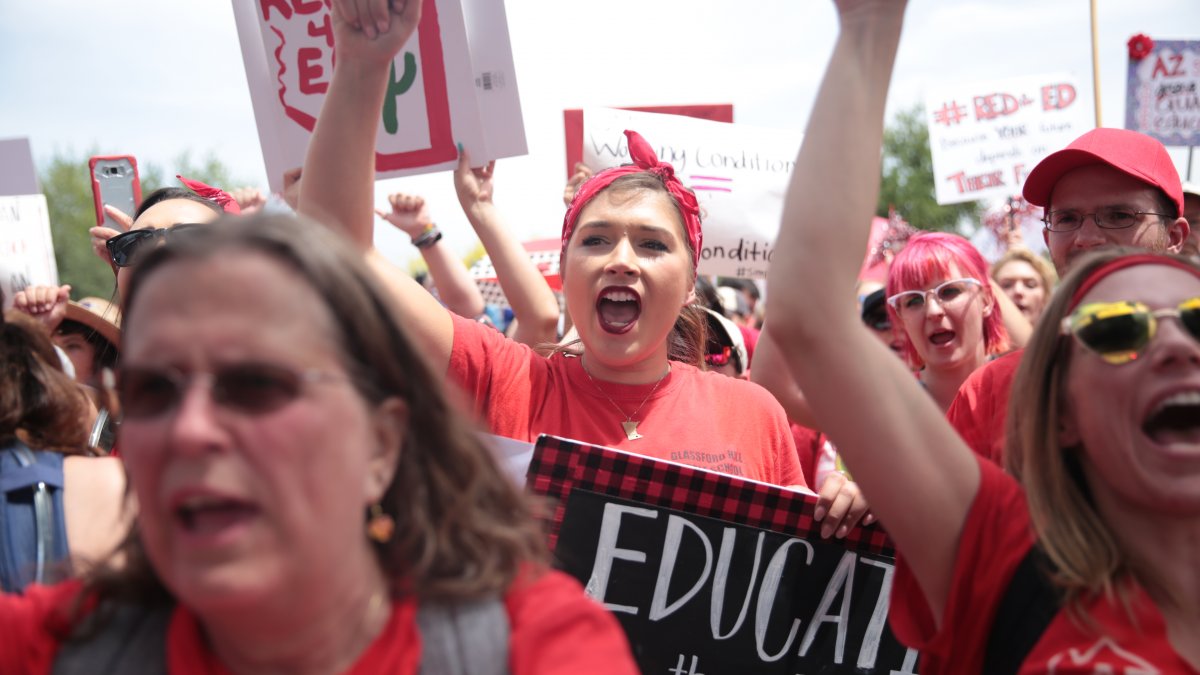 #REDforED Is About Funding for Students and Schools

#REDforED is a movement of teachers, education support professionals, principals, superintendents, school board members, parents, students, and community leaders who are committed to providing Arizona's students with the public schools they deserve.
Share

On a Wednesday in April, the Arizona teacher with 48 students in one class period—and 43 English-language learners in another—will aim to speak with every one of her students. The elementary school counselor with exactly 1,430 children in her care will triage countless emotional and academic crises.

And at least one of their colleagues will say, “Put the rubber band back on that textbook so we don’t lose the cover,” or “Sit over here. The lights work here.”

In what may be the largest educator walkout in history, these educators joined 75,000 teachers and educational support professionals (ESPs) across all of Arizona in walking out of their neglected classrooms. Led and supported by the Arizona Education Association (AEA) and Arizona Educators United (AEU) through the #RedforEd movement, Arizona educators are bringing their demands for adequate educational funding directly to state lawmakers in Phoenix.

No state in the country has cut school funding more than Arizona. Between 2008 and 2015, state lawmakers cut funding per student by 36.6 percent, according to a national analysis by the non-partisan Center on Budget and Policy Priorities. (Second is Florida, which cut funding by 22.2 percent during those years.)

“We can no longer allow the status quo in this state go unchanged. We need to bring the change our students and families need,” said AEU leader and AEA member Noah Karvelis. “We have kids sitting in broken desks, studying out of 25-year-old textbooks in rooms with leaky ceilings. This is unacceptable.

“We are truly in a state of crisis.”

Arizona teachers and ESPs have had enough. The #RedforEd movement started in spring 2018 with teachers wearing red shirts in solidarity. It led to multiple rallies at the state Capitol through March and April, and feeble offers of salary raises from state lawmakers.

In the week prior to the walk out, nearly eight out of 10 Arizona educators voted to walk out on Thursday. Their effort may be larger than statewide walk-outs in three considerably smaller states—West Virginia, Oklahoma, and Kentucky.

“It is your courage, it is your voice, and it is your advocacy for all of Arizona’s students that have brought us to this historic [moment],” said AEA President Joe Thomas. “This is clearly a mandate for action.”

Salaries are not the issue—although they are terrible. The 2018 NEA Rankings & Estimates showed Arizona teachers earned an average $47,402 a year in 2017, putting them at 45th in the nation. Teachers describe earning so little money that their own children qualify for free or reduced price lunch, and yet they still invest hundreds of dollars a year to buy paper, books, mousetraps, and more for their classrooms.

What’s driving Arizona educators to take action is the lack of opportunities for their students. Arizona students are regularly denied physical education, music and art. Classroom technology is 22-year-old computers, held together with duct tape. Class sizes often top 30 in elementary schools and 40 in high schools.

“I’m walking out because enough is enough. I have spent 30 years in education and in that time we’ve seen cut after cut after cut and excuse after excuse. We’ve absolutely had enough,” says technology specialist Thomas Oviatt, an educator for 30 years. “Not only do I think Arizona students deserve better, I think every student deserves better.”

On the AEU private Facebook page, teachers describe how they struggle to provide what their students need to learn. “I teach in a self-contained special education classroom for students with high needs. Most are students with autism or intellectual disabilities. In the past four months I have spent over $500 on curriculum because I do not have any in my classroom,” writes one Arizona teacher.

We’re talking about school globes that spin to show two Germanys (the Berlin Wall fell in 1989…), or reading books that include “a cute dating story by Bill Cosby.” Teachers are using textbooks that are older than they are. Most Arizona school libraries haven’t had money to buy new books since 2008.

Forget about soap or toilet paper in the bathrooms. There are public schools that limit the use of air-conditioners from 10 am to 2 pm only. In one classroom, an inventive teacher set up a homemade air-conditioner using a Styrofoam ice chest and some electric fans. “The rooms were still about 90 degrees inside. The poor kids had headaches and couldn’t learn,” she describes.

Educators are going to let everybody know that Arizona can do better for its children: “I think the Red for Ed movement means hope,” says Aguerre. “It means that we are willing to fight for our families and for our students.

“Being a part of this movement has given me a renewed hope that we can do better for our kids.”

With the passage of the Invest in Education Act, known as Proposition 208 in the November 2020 General Election, educators have managed to accomplish what legislators have failed to do for decades: Create new sustainable revenue dedicated to public education.

The Invest in Education Act will make sure everyone pays their fair share so that Arizona students have the schools they deserve. This initiative voter protects nearly $1 billion for public education funding. This permanent and sustainable revenue is used for teacher salary increases, reducing class size, and making sure students have access to nurses, counselors, and other support staff who are critical to student success.

Getting the Invest in Education initiative, known as Proposition 208, on the ballot has been many years in the making. In 2018, following the history making #REDforED teacher walkout, AEA members collected enough signatures to get a school funding initiative on the ballot only to have the Arizona Supreme Court knock it off. In 2020, hundreds of AEA members braved the summer heat during a pandemic to collect and submit 435,669 petition signatures to the Secretary of State’s office in July.

Soon after the signatures were submitted, a lawsuit was filed against the initiative by a group sponsored by the Arizona Chamber of Commerce. The Invest in Education initiative lost in the first court ruling, then won in the appeal to the Arizona Supreme Court.

The COVID-19 crisis devastated Arizona’s working families and widened the inequities between the haves and have nots. Now, more than ever, we must protect school funding so that every child has the opportunity to learn in a safe and healthy school.

AEA members, leaders, and staff knew that the path forward was to take matters into our own hands. That’s why hundreds of educators hit the streets during the hot summer months to collect enough signatures to get the Invest in Education initiative on the ballot and to contact voters to get it passed.

In a historic win, Arizona voters pass Proposition 208 on November 4, 2020. “Arizona’s 1.2 million K-12 public education students are the big winners tonight. By passing Proposition 208, Arizona voters said yes to our state’s students and their future,’ said Amber Gould, Chairwoman of Yes on 208 – Invest in Education.  “As a teacher and the Chairwoman of Yes on 208, I am incredibly grateful to everyone who voted yes on Proposition 208.  Thank you for your trust and support.”

“Our coalition of educators, parents and public education supporters carried the Red for Ed torch across the finish line today. By voting Yes on 208, Arizona voters made it loud and clear they want teachers to be compensated properly and have the resources needed to successfully educate their students,” said Joe Thomas, President of the Arizona Education Association.

The fight for education funding and the schools our students deserve is not over. In the 2021 legislative session, lawmakers have continued their attacks on INVESTinED through lawsuits and legislation.

Learn more about these attacks and how you can help us fight back to protect INVESTinED.

What Are You Waiting For? No other professional organization does more for Arizona educators. With your support, we can protect our profession today, and for the next generation of educators.
Join Now